A feature of aggregate functions is that the returned numerical values are not formatted, as shown by the first example, which uses “SUM”:

Data fields usually return a formatted value, which is simply displayed by the “Text” object without any change. To apply formatting to the “SUM” result, let’s use the value formatting tools in FastReport.

Select the object containing the Sum and open the format editor either from ‘Display Format…’ in its context menu or through the “DisplayFormat” property in the object inspector. 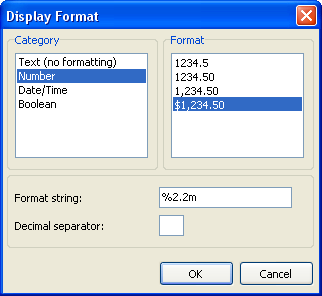 After clicking ОК and previewing the report you will see that the Sum in the report is now formatted correctly:

To display each value in its correct format they need to be formatted individually. To do this we use format tags, which are placed just before the closing square bracket of the expression. In our example, disable formatting for the object (select the “Text (no formatting)” category in the format editor). Now we need to specify the format for just the first expression, as the second one will be displayed correctly by default (i.e. as an integer). Change the object text as follows:
Sum: [SUM(

A comma or a dash can be used instead of the dot in the format_string for numerical formatting. This symbol is used as the separator between the integer and the fractional parts of the value. Any other character is not allowed.
For formatting with the “#b” type (boolean), the format_string is entered as two values separated by a comma. The first value corresponds to “False” and the second to “True”.
To save having to memorize all these tags and their meanings there is a convenient shortcut for inserting format tags in the “Text” object editor. Clicking the

button opens the format editor described above. When a format is selected it is inserted into the text, and if the cursor is placed just before the closing square bracket the format string will be correctly inserted.

This feature of the ”Text” object allows you to color an object depending on a specified condition being met. The condition can be any expression. We’ll use the example with groups to demonstrate this. Let’s set order totals greater than 5000 to be colored green. Select the object containing the Group.“ItemsTotal” field and click on the “Highlight”

button in the designer toolbar. In the highlight editor enter a conditional expression which, if exceeded, will highlight the object; also set the font and background attributes for the highlight. These settings produce this report:

Note the conditional expression we used : ‘Value > 5000’. Here ‘Value’ is the value of the DB field to which the object is linked. Alternatively, the condition could be set as ‘

Using conditional highlighting, it is easy to create reports having a “banded” look, where data lines are alternately colored. To save some effort, let’s use the “Customer List” example that we designed previously.

Remove all the “Text” objects from the “MasterData” band. Place a “Text” object on the data band and stretch it to cover almost all of the band space:

This object will change its color dependent on the data line number. Select the object and set the following conditional expression in the Highlight tab of the object editor: